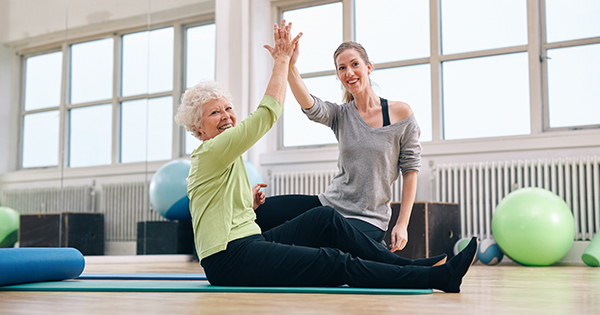 A study finds that increased activity over the age of 60 can significantly reduce the risk of cardiovascular disease.

In 2015, 900 millionTrusted Source people, globally, were over the age of 60. By 2050, the World Health Organization (WHO) expect that number to reach 2 billion.

While it is common for people to become less active as age takes a toll on one’s physical capabilities, a study just published in the European Heart Journalfinds that either maintaining levels of activity or becoming more active at this stage of life is important for reducing the risks of heart attack and stroke.

The researchers found that study participants who reduced their levels of exercise over time had a 27% greater likelihood of developing heart and blood vessel issues. Those who became more active reduced their risk by as much as 11%.

The authors of the study — led by Kyuwoong Kim, of the Department of Biomedical Sciences, at Seoul National University, in South Korea — analyzed data from 1,119,925 men and women 60 years or older.

The data had been collected by the National Health Insurance Service (NIHS), which provides healthcare to about 97% of South Korea’s population. The average age of participants was 67, and 47% were men.

During each check, the healthcare providers asked the participants about their levels of physical activity and their lifestyles.

In their second NIHS health check, the participants reported how their levels of activity had changed since the first checkup.

A majority of the participants, about two-thirds, were inactive at the times of both checks. About 78% of women were physically inactive at the first health check, and this figure at the second check was roughly the same, at 77%.

Men were less inactive both times: 67% at the first screening and 66% at the second.

Just 22% of the overall group had increased their levels of activity between checks, while 54% of participants who had been exercising regularly five or more times per week had become inactive by the time of the second screening.

By the end of the study period, 114,856 cases of heart disease or stroke had been reported among the cohort. The researchers adjusted for factors such as socioeconomic status, age, gender, other medical conditions, and lifestyle details such as smoking and alcohol use.

The impact of activity over the age of 60

The study’s analysis revealed that people who had increased their levels of activity from continuously inactive to moderately or vigorously active three to four times a week had lowered their risk of heart attack and stroke by 11%.

Those who had been active one or two times per week at the first check then increased to five or more times per week by the second check had lowered their risk by 10%.

People with disabilities also benefited from increasing their activity levels, reducing their risk of cardiovascular events by 16%. Participants with chronic conditions such as hypertension or diabetes saw a 4–7% reduction in their chances of experiencing a heart problem or stroke.

Meanwhile, the risk of cardiovascular problems had increased by 27% among participants who had reduced their levels of exercise between screenings.

“While older adults find it difficult to engage in regular physical activity as they age, our research suggests that it is necessary to be more physically active for cardiovascular health, and this is also true for people with disabilities and chronic health conditions,” he continues.

There are some limitations to this study. First, it considered only older adults in South Korea, and the applicability of the findings to older populations in other areas cannot be assumed.

Second, it strongly relies on self-reporting of activity levels, and the findings depend on the accuracy of each individual’s responses.

Finally, the NIHS questions did not encompass all forms of activity — for instance, the researchers did not include housework and other muscle-strengthening activities.

What to do with this information

The findings make the case that physical activity should become a significant, daily priority for older adults as our bodies grow in fragility, and discomfort becomes more common.

Our health services could be doing more to encourage this idea, suggests Kim, adding, “We believe that community-based programs to encourage physical activity among older adults should be promoted by governments.”