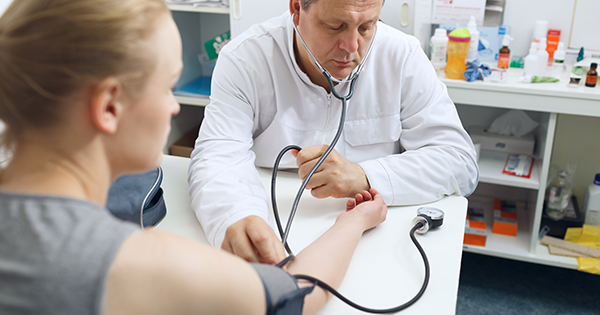 New research suggests that high blood pressure in women is often written off as either stress or menopausal symptoms.

According to a new consensus document from European cardiologists, gynecologists, and endocrinologists, doctors should make much stronger efforts to detect high blood pressure in middle-aged women.

The study authors said that high blood pressure in women is often written off as either stress or menopausal symptoms, both by their doctors and by the women themselves.

When the diagnosis is overlooked, however, it can cause women to delay treatment, putting them at greater risk for conditions like heart failure and stroke.

Why does hypertension in middle-aged women get overlooked?

Dr. Angela H.E.M. Maas, who was the lead author of the document, said that high blood pressure is taken more seriously in men and less well treated in women.

She said this is because we consider elevated blood pressure in women often as “stress,” and in men as “hypertension.”

“This is partly because of bias by doctors, but also by women themselves,” Maas said. “Women often explain an elevated blood pressure as stress-related and are not always open to the hypertension diagnosis and treatment.”

Maas said it can often take more time to convince women and to start and continue medical treatment.

“The timing of onset of hypertension is often at the start of menopause and this leads to overlapping symptoms that are not always properly adjudicated,” she said.

In the past, women were considered less likely than men to have heart disease, according to Dr. Maan Malahfji, a cardiologist with Houston Methodist DeBakey Cardiology Associates, who was not associated with the consensus report.

This may have resulted in doctors being less aggressive in investigating its symptoms and controlling them.

Now there’s growing recognition that women are at just as much risk as men after going through menopause, and there may even be more complications.

“Elevated blood pressure can be manifested in different ways between men and women, but is very often without any symptoms, so screening is vital,” Malahfji said.

What types of hypertension symptoms can be mistaken for menopause?

Maas said one thing that leads to confusion in diagnosing high blood pressure in middle-aged women is the fact that its onset often coincides with menopause.

When symptoms occur that overlap with menopausal symptoms, people may simply dismiss them as being menopause.

These are all symptoms that overlap with hypertension symptoms.

In addition, Malahfji pointed to symptoms like headaches, ringing in the ears, and changes in concentration as potential high blood pressure symptoms that might be attributed to menopause.

Why are women at greater risk after menopause?

“Estrogens are the most perfect vasodilators in young women,” Maas said, “but this reverses after menopause and estrogens cannot prohibit vascular aging.”

Under the age of 50, the absolute risk for a cardiovascular event is lower in women than in men, but this changes between 50 and 70. After 70, women are at higher risk.

“This means that the time frame 50-70 or, even better, between 40 and 70 years, is crucial to start early prevention,” Maas said.

Malahfji added that while women are generally protected against heart disease during their youth, they can be vulnerable to high blood pressure around and after pregnancy,heart failure, and eclampsia, which are also impacted by their sex hormones.

Why is it so important to detect and treat high blood pressure?

According to the most recent Global Burden of DiseaseTrusted Source report, high blood pressure is the number one mortal risk factor for women globally.

“It often starts around menopause, is less well treated because it is too often attributed to menopause, and then after 70 years it leads to heart failure, with a stiffened heart, atrial fibrillation, valvular heart disease, and strokes,” Maas said.

In addition, renal failure and heart attacks may occur.

“If we compare cardiovascular disease risk factors in men and women greater than 70 years, hypertension occurs much more often in women,” she added.

Malahfji agreed that the risks associated with long-term high blood pressure are “tremendous.”

These risks include heart attack, stroke, and, particularly for women, heart failure, he said.

All of these risks can be modified by treating high blood pressure and treatment is associated with better quality of life and a longer life.What about transgender women?

While transgender women don’t go through the same experience of menopause, they do need to take hormones throughout their lives.

As transgender women age, their risk for high blood pressure and blood clots will rise, according to Maas.

“For them, healthy lifestyle measures will be even more important compared to cisgender women,” Maas said.

Malahfji agreed, stating transgender women will need intensive multidisciplinary care to manage their medications and therapies, due to the fact that some of those treatments do place them at higher risk for developing high blood pressure.

“Continued follow-up and regular screening is vital,” he said.

What can women do to make sure they’re not being overlooked?

Malahfji said that it’s very important to keep in touch with your primary physician, but self-monitoring your blood pressure at home is just as important.

He added that the measurements you take at home are more representative of your true blood pressure.

Below 120 mm Hg (top number) and 80 mm Hg (bottom number) is considered to be a normal blood pressure.

Anything greater than this is considered to be elevated.

Your doctor can advise you about steps you should take, which could include various lifestyle changes or medications.

If your doctor suggests medications, don’t hesitate to take them if needed, Maas said.

“Women often have an aversion to take medication, which can be really harmful,” she said. “I always say, if you do not have to take oral contraceptives anymore, just take a pill for your BP. You will live longer and healthier.”

In addition, Malahfji suggested that avoiding excessive consumption of alcohol, excessive use of pain medications such as NSAIDs, and regular exercise are all very important to maintaining a healthy blood pressure.