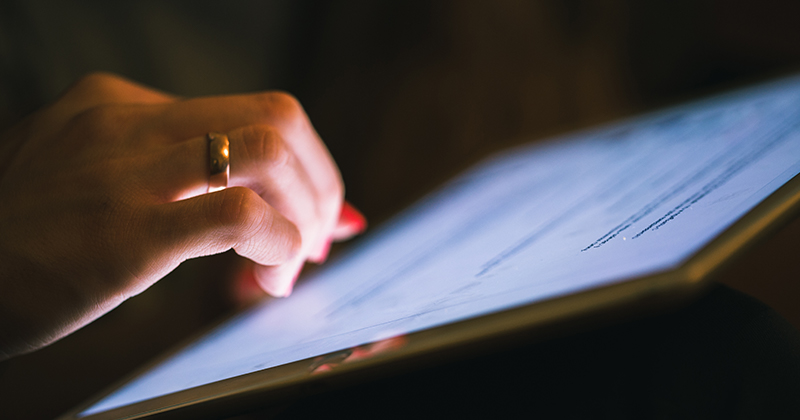 Studies suggest blue light from cellphones and computer screens can cause eyestrain, but it’s less clear how tech time may be affecting your complexion.

In the past, most of our worries about premature aging and skin cancer stemmed from the damaging UVA and UVB rays from the sun. But over the last decade, scientists have learned that these may not be the only rays of visible light people need to be concerned with. Blue light — emitted by both the sun and digital devices — could be wreaking havoc on skin health.

“The trend of blue-light blocking in skin care, and wellness in general, is increasing because we are all exposed to blue light more now with the use of smartphones and tablets,” says Nazanin Saedi, MD, director of the Jefferson Laser Surgery and Cosmetic Dermatology Center in Philadelphia.

What Is Blue Light Anyway?

“Blue light is a portion of the visible light spectrum (380 to 500 nanometers) that is contained in sunlight, but it is also given off by indoor lighting [and] common electronic devices, like computer screens and smartphones,” says Jason Bloom, MD, facial plastic and reconstructive surgeon at Bloom Facial Plastic Surgery in Bryn Mawr, Pennsylvania.

Most of the blue light people are exposed to comes from the sun, according to the American Academy of Ophthalmology. But considering the average American spends more than 11 hours per day interacting on digital media, per Nielsen data published in July 2018, people are exposed to significantly more blue light than previous generations — which is why it’s becoming more of a concern.

“The amount of high-energy visible light or blue light given off by devices is only a fraction of that given off by the sun, but the problem is that we are constantly spending time on and carrying around these devices and keeping them close to our face and heads,” explains Dr. Bloom.

Scientists know that blue light, whether from the sun or devices, can cause eye strain. A review published December 2018 in the International Journal of Ophthalmology found that on the visible spectrum, high-energy blue light with a wavelength between 415 and 455 nanometers passes through the cornea and lens to the retina. In the process, it can cause diseases such as dry eye, cataracts, and age-related macular degeneration. Study authors wrote that it may even affect hormone production, creating an imbalance that can negatively affect sleep quality.

What Do We Know About Blue Light and Skin Health?

Nonetheless, research on the effects of blue light on the skin is lacking.

Preliminary studies may hold clues, though.

Bloom points to a past study that suggested people with darker skin who were exposed to visible blue light had more swelling, redness, and pigment changes than people with lighter skin who were exposed to similar levels of UVA rays. “They do know that the penetration of visible blue light through the skin can cause reactive oxygen species, which then can lead to DNA damage and breakdown of our collagen and elastin fibers,” he points out.

Another small study published in February 2015 in Oxidative Medicine and Cellular Longevity found a connection between blue light exposure and the production of free radicals in skin, which have been linked to accelerated appearance of aging.

How Can You Tell if Blue Light Has Damaged Your Skin?

Skin changes like pigmentation, swelling, early wrinkling, and redness can all be signs of damage from blue light, Bloom says.

But Kathleen Suozzi, MD, a dermatologic surgeon and director of aesthetic dermatology at Yale Medicine in New Haven, Connecticut, reiterates that there is no solid scientific evidence that blue light damages skin. “It is suspected that blue light may induce harmful effects on the skin, specifically pigmentation and photoaging; however, this has not been proven,” she says. In fact, she points out that some dermatologists use blue light to treat certain skin conditions, such as acne, and there have been no reports that these treatments damage skin pigmentation.

How to Protect Your Skin From Potential Blue Light Damage

Dr. Saedi suggests that the best way to prevent potential blue light damage is by cutting down your screen time. You can also invest in a screen protector for your electronics, such as the ophthalmologist-endorsed EyeJust, starting at $34.99 for an iPhone cover, which can block or dim blue light. “It is more important to try to be proactive by reducing the screen brightness on your phone or wearing headphones so the phone can be in your pocket and not directly against your cheek and face,” adds Dr. Boom.

And if you aren’t already slathering a sunscreen with at least SPF 30 on your face every day, start now. “Wearing sunscreen is always recommended for patients on a daily basis,” says Bloom. “I stress the importance of physical blocking sunscreens, like EltaMD or Coola, which contain zinc oxide or titanium dioxide. This can help in blocking blue light, because chemical sunscreens that may block UVA and UVB rays do not block visible or blue light rays.” One past study found that sunscreen with titanium dioxide offered superior protection from blue light compared with those with traditional ingredients. Saedi also recommends Colorescience Sunforgettable sunscreen, a broad spectrum mineral sunscreen with HEV (high-energy visible light) protection.

As for skin-care products marketed as helping to protect the skin against blue light, Bloom suggests that the jury is still out on their effectiveness due to lack of research. “We aren’t sure how detrimental this band of visible light is to our skin,” he explains.

Can You Undo Blue Light Damage to the Skin?

Because blue light causes reactive oxygen species to break down collagen, Bloom suggests slathering on skin-care products with antioxidants like vitamin C (ascorbic acid). You’ll commonly find vitamin C in serums to help battle the oxidative stress that this visible light causes. Iron oxide is another ingredient that may help reverse damage, Saedi says. Past studies have found that vitamin C can help with and prevent photoaging and treat hyperpigmentation, while one study found that iron oxide may help with reducing sensitivity to blue light.

So How Worried Should You Be About Blue Light?

At this time, there isn’t enough conclusive research to determine how damaging blue light from cellphones and electronic gadgets is to the skin. Dr. Suozzi does point out, though, that blue light from the sun — and all of the sun’s rays, for that matter — remain a known cause for concern. “The amount of energy emitted by [technology] sources is minimal compared with the irradiances from the solar spectrum,” she says, “and their effect on the skin is likely minimal.”