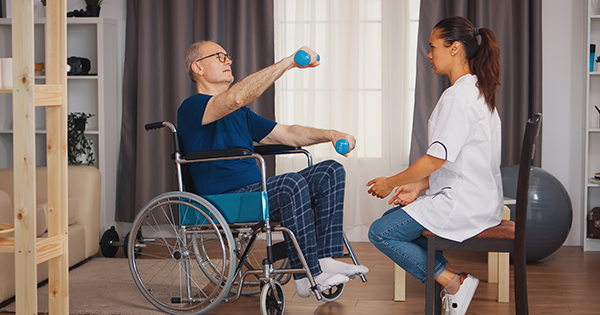 More than 34 million people in the United States have diabetes, and 90–95% of these cases are type 2 diabetes.

The cells of people with diabetes are less responsive to insulin, which is the hormone that allows tissues throughout the body to take up glucose from the bloodstream.

One symptom that indicates that a person may be in the early stages of type 2 diabetes is reduced grip strength. Conversely, there is also some evidence to suggest that resistance exercise can lower the risk of developing the condition.

A new study led by scientists at Lund University in Malmö, Sweden, helps explain why skeletal muscle weakens in people with type 2 diabetes.

Normally, exercise or injury activates immature cells in muscle tissue, called muscle stem cells. The cells then proliferate and transform into mature muscle fibers in a process known as myogenesis, which regenerates the muscle.

The new research suggests that one of the reasons that muscle tissue does not regenerate properly in people with diabetes is that it does not produce enough of a key protein.

The protein, called VPS39, is part of the molecular machinery that cells use to dispose of damaged components in order to regenerate themselves.

The technical term for this waste disposal system is autophagy, which literally means “self-eating.”

According to the new research, the gene that makes VPS39 is less active in the muscle cells of people with type 2 diabetes. This impairs the ability of the muscle tissue to generate new muscle fibers and reduces its uptake of glucose.

“Our study is the first ever to link this gene to type 2 diabetes,” she adds.

The results of the study appear in the journal Nature Communications.

Prof. Ling and colleagues study epigenetics, which is the way in which genes are switched on and off (or silenced) during the course of a cell’s development.

Epigenetic changes might result from external and environmental factors or be a consequence of the normal development of cells. Illness and lifestyle factors such as exercise and diet can also cause epigenetic changes in muscle and other tissues.

In people with type 2 diabetes, the condition appears to cause epigenetic changes that silence the VPS39 gene, preventing it from producing the protein of the same name.

The researchers made their discovery by comparing muscle biopsies from 14 people with type 2 diabetes and 14 healthy controls. The team matched the participants for their age, sex, and body mass index (BMI).

When the scientists grew muscle stem cells and mature cells from the volunteers under identical conditions in the laboratory, the activity of 20 genes consistently differed between the two groups.

This suggests that diabetes had caused epigenetic changes in these genes, altering their expression.

Among the genes that differed between the people with type 2 diabetes and the controls was VPS39, which is known to be part of the cellular machinery that controls autophagy.

To investigate the role of VPS39 in muscle regeneration, the researchers silenced the gene in healthy human muscle stem cells.

When the cells could no longer make the VPS39 protein, this triggered a range of changes that closely resembled the changes in muscle stem cells from people with type 2 diabetes.

The net effect was to prevent the cells from developing into mature muscle cells.

The researchers further tested this idea by studying genetically modified mice that were deficient in the protein. This mimics the epigenetic change that occurs in people with type 2 diabetes.

Sure enough, there were similar changes in the animals’ muscle tissue, including reduced uptake of glucose, and changes in the regulation of autophagy and the maturation of muscle cells.

The study authors are optimistic that their discovery could inspire new kinds of treatment for type 2 diabetes.

“Our next step is to study the impact of non-genetic risk factors for type 2 diabetes on epigenetics in muscle stem cells,” she added. These could include the influence of lifestyle factors such as diet and exercise.

In their paper, the researchers emphasize that they found differences between people with type 2 diabetes and healthy controls in the expression of several genes in addition to VPS39.

Although they focused on the role of VPS39 in this study, they do acknowledge that other genes also contribute to muscle dysfunction and insulin resistance in type 2 diabetes.