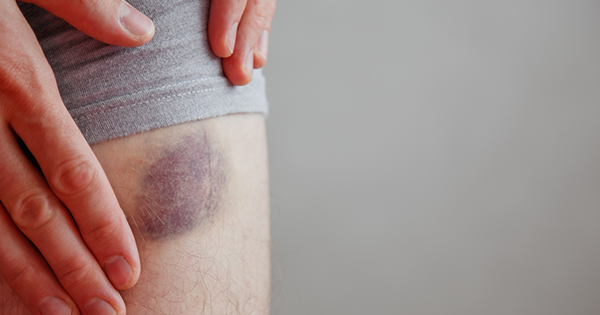 A bruise occurs when blood becomes trapped under the skin, usually because of an impact that damages a tiny blood vessel. A fall, blow, or anything else that puts sudden high pressure on the skin can cause a bruise. Very forceful blows can damage bones, causing deep bleeding and bruises that take several weeks to heal. Minor bruises often heal in a few days.
Some people find that they bruise so easily that they do not remember the original cause. Others develop large bruises after minor injuries or notice that their bruises take many weeks to heal.

Bruising easily does not necessarily mean that a person has a medical condition, but a sudden change in the number of bruises that a person develops may warrant a conversation with a doctor.

Any condition or medication that increases bleeding may also make a person bruise more easily.

People tend to bruise more easily as they age because blood vessels become weaker and the skin thins.

Easy bruising may also run in families, so people whose relatives bruise easily may notice that they do as well.

It can be difficult for a person to assess whether they have more bruises than usual or bruise more easily than most other people.

Some signs that a person bruises more easily than is typical include:

Numerous medical conditions and lifestyle issues can cause a person to bruise more easily. The most common include:

Medications that thin the blood may cause a person to bleed and bruise more. Some popular blood thinners include:

Some other medications may weaken or change the behavior of blood vessels, worsen inflammation, or otherwise increase the risk of bleeding. They may include the following:

People taking medication who notice an increase in bleeding or bruising should ask their doctor if their medication can cause bleeding. If this is the case, they can discuss with the doctor the risks and benefits of continuing treatment.

As liver disease progresses, the liver may stop producing the proteins that help the blood clot. As a result, a person may experience excessive bleeding and easy bruising. They may also become very itchy, feel very tired or sick, and have swollen legs, dark urine, and yellowing eyes or skin.

Liver disease is treatable, especially when a doctor diagnoses it early. People who drink should immediately stop when they develop symptoms of liver health problems. A doctor can provide advice on the right combination of medical treatments and lifestyle remedies.

Bleeding disorders
Many genetic conditions can cause a person’s blood to clot slowly or not at all. Von Willebrand disease, the most prevalent bleeding disorder, affects about 1% of the population. A person with this condition has defective or absent von Willebrand protein, which is important for blood clotting.

Hemophilia, another bleeding disorder, causes missing or defective factor VIII (hemophilia A) or factor IX (hemophilia B). Both of these proteins are important for blood clotting. Synthetic versions of these clotting factors can help treat hemophilia and reduce the risk of serious bleeding, including severe bruises.

Vitamin deficiencies
Certain vitamins enable the body to heal and the blood to clot. Deficiencies in vitamin C can cause a condition called scurvy. Scurvy causes bleeding gums, wounds that do not heal, and easy bruising.

Vitamin K helps the body form clots to stop bleeding. Newborns often have very low levels of vitamin K, which are insufficient to stop bleeding. Without a vitamin K injection at birth, babies may bruise easily or bleed excessively. Adults who are very deficient in vitamin K may also notice a sudden increase in bruising.

Vitamin deficiencies are usually reasonably easy to correct. However, it is important that a doctor diagnoses these deficiencies with a blood test so that they can recommend the appropriate vitamin supplement.

If vitamin supplements do not cure the issue, this may mean that a person has another problem, such as a metabolic or gastrointestinal disorder that makes it difficult for the body to absorb nutrients.

Vasculitis
Vasculitis refers to a group of conditions that cause inflamed blood vessels. In addition to increased bleeding and bruising, a person may experience shortness of breath, numbness in the limbs, and ulcers, skin lumps, or purple spots on the skin.

The type of treatment depends on the severity of the vasculitis and which area of the body it affects. Several medications, including steroids, may help.

Senile purpura
Senile purpura usually affects older people, including about 10% of people over the age of 50 years. It causes purplish-red bruise-like lesions on the skin and is most likely to affect the arms and hands.

In many cases, the lesions follow an injury to the skin. However, they last much longer than bruises and are usually much larger. Sometimes, the skin remains brown even after the lesion heals.

Protecting the skin from the sun may reduce the severity of symptoms. People with senile purpura must be mindful of their easy bruising and try to protect the skin from injury. There is no cure, but a doctor may be able to recommend lifestyle remedies to lessen the frequency and severity of lesions.

Cancer
Rarely, a sudden increase in bleeding, including bruising, may be a sign of cancer. Cancers that affect the blood and bone marrow, such as leukemia, may cause bruising. A person may also notice bleeding gums.

Many cancers are highly treatable, especially with an early diagnosis. People should never allow fear to delay treatment but should see a doctor right away. Chemotherapy, medication, and surgery can save lives.

When to see a doctor

Easy bruising is a medical emergency if there is a large, massive bruise that appears to be continuously bleeding under the skin.

Injuries to organs are also an emergency, so a person should go to the emergency room if they sustain a hard blow to the back, chest, or stomach, if a bruise is very painful, or if it is unusually black or swollen.

In most cases, however, it is safe to wait to see if a bruise resolves on its own.

People should consult a doctor about easy bruising if:

In most cases, easy bruising is a minor inconvenience that is due either to genetic factors or a minor medical condition.

However, bruising can also be an early warning sign that something is wrong with the organs or blood vessels. Therefore, it is best not to ignore a change in bruising pattern and to err on the side of seeing a doctor.

In most cases, the underlying cause of the bruising is either benign or highly treatable.